Everything you need to know about Ericeira

Ericeira is a traditional Portuguese fishing village with history dating all the way back to the 12th century. It is located 40 km northeast of the bustling capital city Lisbon. The hospitality of its people, the harmony of the old village with its narrow cobblestone streets, the local culture, the sea, the fishing, the cuisine, the bold Atlantic views and the surf make this town a great place to visit.

Food lovers will find many great restaurants and cosy cafe’s to enjoy the local fresh sea food and typical Portuguese delicacies such as the pastel de nata. The prices of food and drinks in the restaurants are very affordable. You’ll also find many non-portuguese restaurants from pizza to sushi and multiple places for a quick bite between the surf sessions. After dinner you can pop in one of the many cool bars to enjoy a gin tonic or a local beer. In the nightclub the party continues until dawn if your party feet are itching.

For shopping, the village offers many traditional handicraft and fashion shops as well as international surf brands such as Billabong and the Quiksilver Boardriders store. And if that is not enough, you can visit Lisbon or one of the big shopping malls in the area.

Active holidayers love Ericeira because of the countless sport opportunities. The village is famous for being the first World Surfing Reserve in Europe. Next to surfing you can do many other water sports, go mountain biking in the breathtaking Atlantic coastline, try horseback riding or go for a hike. For skateboarders there is a big skate park at the Quiksilver Boardriders club. To keep your body and mind fit after surfing you can take a yoga classes or visit the spa in town.

Culture lovers can eat their heart out in and around Ericeira. The village has many monuments and the old village itself exhales history and stories from the past. 25 km from Ericeira you can find the Unesco World Heritage town of Sintra, also known as the town of the fairytale castles. It is located within the Sintra mountains and right next to the Sintra-Cascais natural park. Only 10 km from Ericeira is the Palace of Mafra, one of the biggest palaces in Europe that was built by the King John V in the 18th century and is told to have nearly bankrupted the whole nation. Since 2020 the Mafra Palace is also a UNESCO World Heritage site.

Ericeira is surrounded by beautiful beaches. Right in the center you have Praia dos Pescadores, just south of town Praia do Sul and just north of town Praia do Norte. The famous beaches Foz do Lizandro and Ribeira d’ilhas are also within easy reach from Ericeira. The beaches along the coastline vary from hidden little beaches between the cliffs to wide open sandy beaches.

Portugal is famous for its simple, affordable and very tasty food. Typical Portuguese dishes include bacalhau (codfish), sardines, polvo (octopus), chicken piri piri and porco preto (black porc). If you are more feeling like a snack, you should try a bifana, prego or fransesinha. Since Ericeira is a fishing village, don’t forget to try a simple grilled fish or the famous arroz de marisco (seafood rice).

Ericeira offers many shopping opportunities ranging from traditional handicrafts to fashion boutiques. For surfers, there are also many surf shops. You shouldn’t miss the big ones north of town called Quiksilver Boardriders and 58 Surf. Both shops also have a nice terrace for a cold drink in the sun. For the best expert advice on surf gear, Boardculture is the place to go!

Ericeira is of course famous for great surf conditions. But the town has much more to offer for sport enhusiasts. You can hike or bike different trails along the coast, go to the big skatepark at the Quiksilver store, play tennis or midget golf at Parque de Santa Marta, go bouldering or simply play a good game of beach volleyball on one of the beaches.

Ericeira’s climate is classified as warm with moderate seasonal changes. Summers are dry and hot due to the domination of subtropical high pressure systems while winters experience moderate temperatures and changeable weather.

This part of Portugal boasts one of Europe’s mildest climates and warmest winter seasons. Weather in this area during winter has daytime temperatures that average 14°C. Summer is the driest and hottest season with average daytime temperatures peaking at 27°C in August. During spring (March-May) and autumn (October-November) the daytime temperatures range from 17°C to 22°C. Ericeira gets a very high level of sunshine; with more than 360 hours in July. Most rainfall can be expected in December, both in terms of rain quantity and the amount of rainy days.

As there is nearly always a (sea) breeze, you won’t experience too hot summer days. The predominant wind direction over the year is from the North followed by West and East. The average wind speed is 18 km/hour (3 Beaufort) and doesn’t have much variation over the course of the year. September is the calmest month of the year while December is the windiest.

The sea water temperature ranges between 15°C and 20°C. The water is normally the coldest around February and the warmest around September. But there can be big fluctuations day by day depending on the swell direction that can bring cold ocean currents closer to the coast. 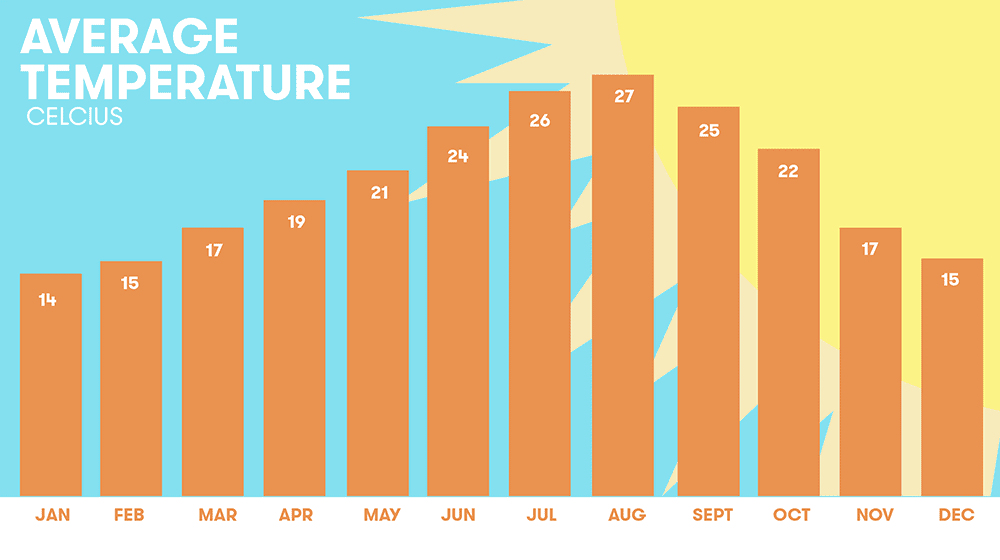 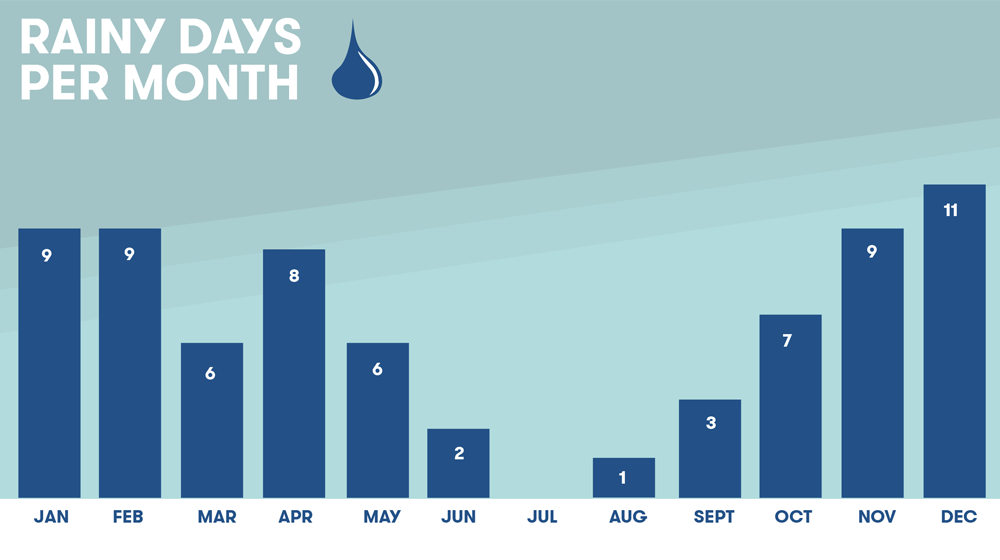 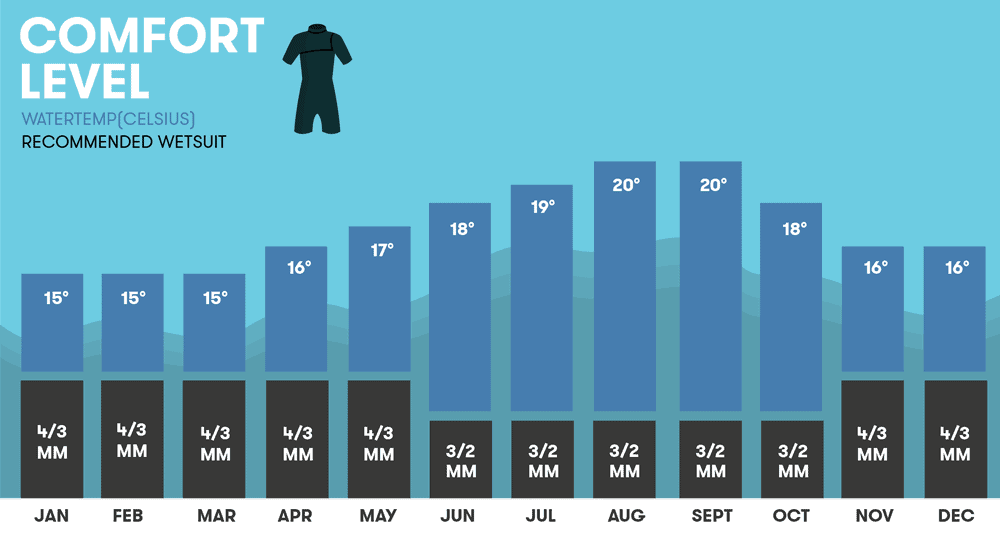 Ericeira with its pittoresque village and beautiful coastline is a perfect holiday destination for all sort of travellers. The vibe is just amazing!

Great places to visit when you are in Ericeira

Bustling capital with lots of character

The biggest waves in the world

Where is Ericeira located?

Ericeira Surf House is very centrally located: 30 minutes from Lisbon airport and less than 3 hours from the airports of Faro and Porto. Multiple airlines are flying to these destinations, so you should be able to find a good deal from anywhere in Europe. Below you can find instructions how to get to Ericeira Surf House if you rent a car or choose public transport. Keep in mind that we run airport transfers from Lisbon.

By public transport:
Arriving at Lisbon Airport take the metro and exit at Campo Grande station. As you exit the metro station you find a bus terminal where the buses (Mafrense) to Ericeira depart.

Arriving at Faro Airport take a bus to the city centre / Faro train station and take a train to Lisbon (destination Lisboa-Oriente). Arriving at Lisbon take the metro and exit at Campo Grande station. As you exit the metro station you find a bus terminal where the buses (Mafrense) to Ericeira depart.

We will pick you up from Ericeira bus station free of charge (arrival before 21h00).

We are looking forward to meet you!